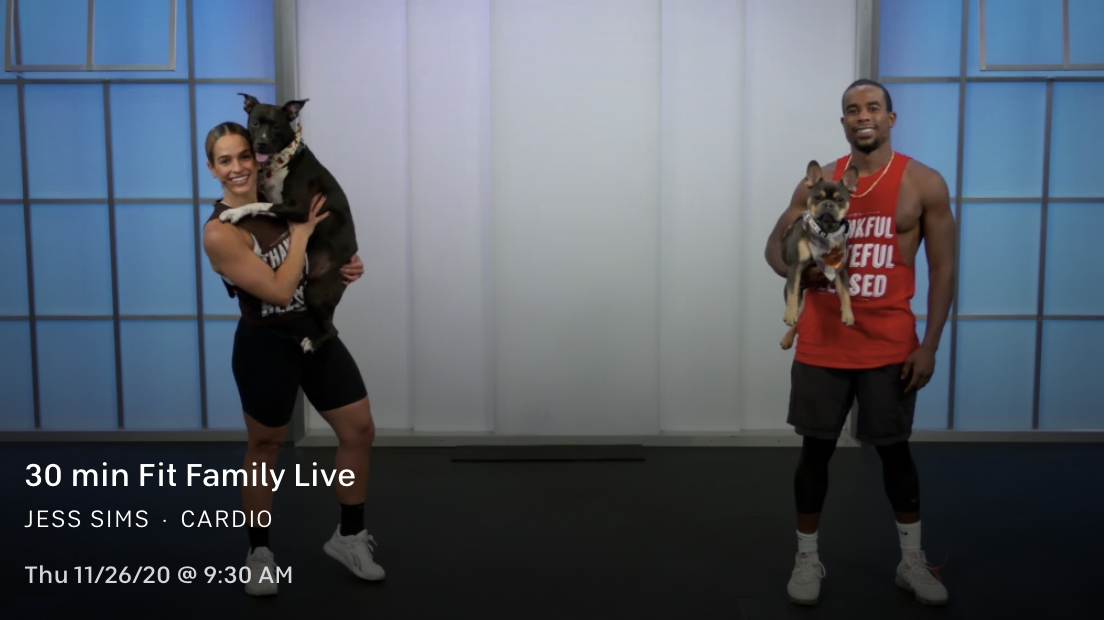 Have you noticed how many Peloton instructors seem to have pets? Mostly, we’re talking about dogs. However, some do have cats, too.

Which in Peloton vernacular would be Pelopups and Pelocats. Both are legit hashtags on the Peloton leaderboard as well as on Instagram

My dogs inspired my own leaderboard name. It is Leah_is_Pawsome

But this fun article isn’t about me. It’s about the pets that live at home with Peloton instructors.

I’ve scoured their social media to round up this information on what kind of pets they have and their names. Whenever possible, I’ve borrowed an image from Instagram.

Or, if on the other hand they have a brand partnership that involves their pet, I’ve included art from that.

Finally, I know that there was one epic Peloton family fun class that Jess Sims and Alex Toussaint co-taught. And they brought their respective dogs to be a part of that class.

Your favorite Peloton instructor with dogs

I’d mentioned how Jess Sims and Alex Toussaint taught a family fit class with their dogs. Well, it turns out that Toussaint actually has two dogs.

Both are French bulldogs. One is called Cassius (sometimes DJ Cassius); still working to figure out the name of the other one.

Aren’t they adorable in matching Christmas outfits on Instagram?

Jess Sims is one of the ultimate Peloton dog moms. She talks about her rescues Sienna Grace and Shiloh during her outdoor walks.

During the pandemic, when Peloton instructors were teaching from home, I can remember at least one dog doing a cameo in class. Usually, they were just sleeping on the bed.

Also, Sims has partnered with dog food brands. So, Sienna Grace and Shiloh have appeared in photos with her.

Becs Gentry and her partner are now a family of five. No, they do not have three dogs.

Instead, Becs just gave birth to a baby boy. He joins their pack of two dogs.

I love seeing Peloton instructors and their dogs being friends in real life. This picture is from the New York City Marathon.

Hannah Corbin brought her pup Juan to hang out with Becs Gentry and her dog to cheer on the runners. How adorable.

Recently, Bradley Rose chatted in a class about how he came to have one of his two dogs. They are named Alfie and Chloe.

I believe it is Chloe that is a chihuahua schnauzer mix. What’s that you say?

Well, as Rose explains, a Schnauzer breeder was fostering a Chihuahua–or maybe it was vice versa. Anyway, the foster was not neutered and he managed to “spend the night” with the breeding mama.

A few months later, you get Chihuahua-zers. Or would they be Schanuz-huas? Either way, his dogs are adorable.

Rebecca Kennedy’s dog is called Sunny. She has her own Instagram account–she being Sunny. Of course, Rebecca has one, too.

Recently, Kennedy took Sunny on a hike and shared this photo of them at the top of a mountain.

Not only does German-speaking Peloton instructor Marcel Maurer live in London with his Vizsla named Hugo, but Hugo has his own Instagram account. It often features Hugo and Marcel exercising.

Not surprisingly, King makes lots of cameos in it.

Previously, King had a dog named Zeus, who appeared to be a Shiba Inu. Sadly, Zeus died in 2020.

Her three-dog pack includes Roy the Bulldog (who has his own Instagram–of course, he does), Peggy, a Frenchie pug mix, and Manny the mutt.

For the longest time, Peloton yoga instructor Anna Greenberg considered her dogs Loki and Mia her only babies. Then in 2022 she had a human baby.

When I recently visited the Peloton studios NYC, I discovered that German speaking instructor Nico Sarani teaches yoga classes in English as well. I was waitlisted for one of her classes but didn’t get in.

Anyway, turns out Nico is also a dog mom. Her Australian Shepherd is called Charlie.

I wonder if Charlie the dog speaks or understands German and English the way his mom does.

Kendall Toole’s pup Bowie is a mixed breed ball of adorable. And Bowie has his own line of snacks.

During outdoor walks with Matty Maggiacomo, I’ve heard him refer to his dog bulldog named Luther. I appreciate that Matty understands that sometimes we’ll do his Peloton app walks while walking the dogs, because he walks his dog, too.

For the longest time I’ve known that Peloton instructor Olivia Amato’s best furry buddy was a dog named Tobi. In fact, when I looked at the pictures on Instagram from her Ireland wedding, I could have sworn it appeared she brought Tobi with her.

Anyway, most recently on her feed it seems that Amato has added a second dog to her family. This brown and white beauty is named Rue.

Cesar is Peloton instructor Tunde Oyeneyin’s dog. I’ve heard he’s a Chihuahua, and he might even be a senior dog.

His eyes appear a bit cloudy, and he’s got a gray muzzle. Nonetheless, he’s adorable and a frequent guest on Tunde’s Instagram feed.

Like so many Peloton instructors, I learned about Selena Samuela’s dog, Dolly, while taking one of her outdoor walks on the Peloton app. She also introduced me to the music of Chris Stapleton.

Ross Rayburn is a dog dad times two as of July 2022. That’s when he and his husband welcomed Theo to the dog family. They already had a pup named Hattie.

I love spinning with her; she’s a ball of energy.

I also love her goldendoodle dog named Rigoberto. He goes by Rex and, shocker, he has his own Instagram account like so many other Peloton instructor pets do.

Can you tell what breed of dog Jermaine Johnson has? If I had to guess, I would say French bulldog pitbull mix. What about you?

It doesn’t appear that Matt Wilpers currently has any pets. However, a few years ago, on National Pet Day, he posted on Facebook about how he grew up with Brittany Spaniels and that they are still his favorite dog breed.

Daniel McKenna, aka the Irish Yank, documented his Rottweiler called Dougal on Instagram. This began when he got Dougal as a puppy.

Now Dougal is fully grown. Even though McKenna is no longer with Peloton, I still love seeing Dougal on Instagram.

It appears that cats are not nearly as popular around Peloton. However, there are a few instructors with feline family members. I’ll bet they celebrate National Cat Day!

My sources tell me that Emma Lovewell’s cat is called Kimchi. So this picture from Emma’s Instagram really is quite meta, don’t you think?

Christine D’Ercole aka I Am I Can I Will I Do often has stories on her Instagram about the cats she shares with her husband Mr. Hicks.

One cat is simply known as Mr. Cat. The other, a tortoise kitty, is Pigeon.

It appears Peloton Row instructor Katie Wang is a cat person. Even her bio on the Peloton website mentions her love of cats–and her grandma, too.

If I didn’t know better, I’d say that Hannah Frankson’s cat Wray is a Maine coon cat. But do Maine coon cats, one, live in England, and, two, come with orange fur?

Kristin McGee recently adopted a beautiful gray tabby named Lucky. Her three sons seem to love the cat from the moment they met it.

It’s been funny to see the cat interrupting McGee’s Instagram reels, such as below. How ironic that the cat decided to come on camera during a bird dog.

Here is a gift guide for those with Pelopups or Pelocats. 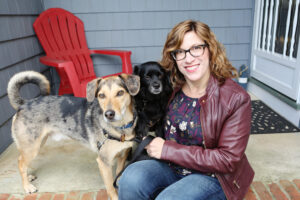 Over the past 20 years, Leah Ingram has rescued four dogs. Currently, her fur family includes Oscar, left, and Sadie, right.